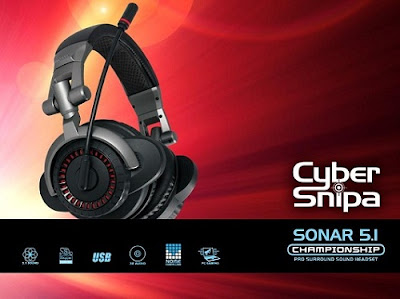 Last we were lucky to receive the Sonar 5.1 Championship PC Gaming Headset from Cyber Snipa. I was fortunate to be able to take this headset to the past LAN War at Indiana University and really put it through the gauntlet so-to-speak. After a long tandem of hourly gaming, I’ve got the stats on this superior headset.

The Cyber Snipa Sonar 5.1 Championship headset is a bit unlike any other headset I’ve used. The design is really top-notch, and to be honest, it just looks really cool. It’s very comfortable on the top of your head, but you may run into problems if you have large ears like me. The ear pieces are comfortable, but smaller than they look. I first thought I could turn them, which would be cool, but they’re fixed and won’t slide.After a while, though, you don’t really notice the issue, so it’s not a big complication.

Technically the headset performs at the top of its class. It connects through USB, so it’s great for on-the-go gaming. The drivers installed instantly and the headset was ready to go. With 8 individual speakers, it’s great to use when you’re in a room with a lot of ambient noise. Sitting in a crowded area with gamers all around me yelling, computers buzzing, and people conversing everywhere, the Sonar did a great job of producing enough sound to keep me focused on the game.

Here are the tech specs on the speakers themselves:

Along the connector cord is a channel controller that allows you to change the volume of the main, rear, center, front, and subwoofer speakers in the headset. These come in handy when you want to fine-tune the sound to any game, video, or style of music you’re listening to. Add that to the adjustment software that’s available for download with the Sonar, and you have limitless ability to adjust the settings to near perfection for your playing needs. I was able to hear every spoken word, every creeping monster, and every shot fired in my direction.

The Sonar even comes with its own carrying case once you take it out of its packaging. The case makes it easy to pack up and travel to wherever your gaming takes you, enabling you to take the headset along for the ride. It’s not one of those cases where it’s impossible to fit everything in. I takes about ten or so seconds to pack, zip up, and get going.

The Cyber Snipa Sonar 5.1 Championship Headset performed great for what it was designed for. With its travel case and USB connection method, it was a great headset to have with me when traveling to game. While it was a little bit uncomfortable to me, I eventually lost sight of that while using it. It did get a bit hot since the ear pieces are insulated to cancel out noise, which required me to take breaks. All in all the headset worked out great for me. Sitting at about $80, this is a perfect headset for the price, and Cyber Snipa delivered with it. If you’re looking for a cheaply-priced headset, the Sonar Championship is what I recommend for you. 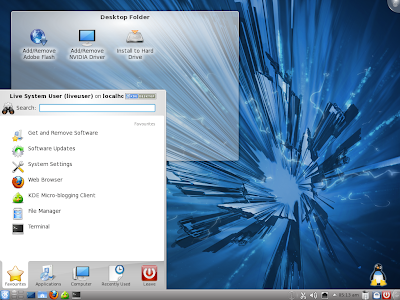 Chris Smart has released a new development build of Kororaa Linux 14, a Fedora-based desktop distribution: "Kororaa 14 (code name 'Nemo') beta 5 has been released for download, in 32-bit and 64-bit flavours with KDE and GNOME. If you've been waiting to try out Kororaa, this is the version to test! I have finally packaged up all of the system (configuration file) changes we make, into RPMs in the Kororaa repository. This means that future changes can be pushed out via updates - theoretically, no need to re-install when the new release comes out (unless you want to). New features: update to Firefox 4 by default for KDE and GNOME; packaged all Kororaa system changes into RPM repository. Bug fixes: fixed missing dictionaries in LibreOffice." Here is the brief release announcement. Download (SHA1): Kororaa-14-Beta5-i686-Live-KDE.iso (1,708MB), Kororaa-14-Beta5-i686-Live-GNOME.iso (1,521MB), Kororaa-14-Beta5-x86_64-Live-KDE.iso (1,753MB), Kororaa-14-Beta5-x86_64-Live-GNOME.iso (1,567MB).