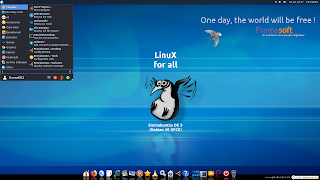 The Emmabuntüs project develops a lightweight distribution based on Debian for lower-end computers. The project's latest release is based on Debian 10.6 and features the Xfce and LXQt desktop environments. "The Emmabuntüs Collective is happy to announce the release of the Emmabuntüs Debian Edition update 3 1.0-3 (32-bit and 64-bit editions), based on the Debian 10.6 'Buster' distribution, featuring both Xfce and LXQt desktop environments. This new update of our distribution provides an OEM installation mode in the frame of our reuse campaign for all that we launched beginning of September. The following fixes and improvements have been made: addition of the OEM install mode via Calamares; addition of Warpinator; addition of the zram-tools utility; update of Multisystem 1.0451 dated 2020-10-03, with the Emmabuntüs DE 4 support and addition of a specific theme for the reuse campaign; updates of HPLip 3.20.6, Firefox ESR 78.3.0, Thunderbird 78.3.1, TurboPrint 2.50-1, VeraCrypt 1.24-Update7." The new version also includes some cloning options for OEM providers. Further details along with screenshots of the new OEM options can be found in the project's release announcement. Download: emmabuntus-de3-amd64-10.6-1.03.iso (3,369MB, SHA256, torrent, pkglist).