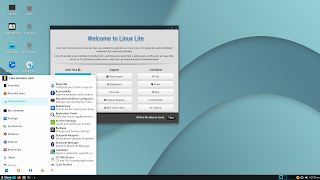 Jerry Bezencon has announced the release of Linux Lite 5.2. The project's latest release is based on Ubuntu 20.04.1 and introduces a number of small changes and improvements. The firewall can now be managed through a module in the settings panel, old GTK2 software and themes have been removed, Adobe Flash is no longer included in the distribution, and new packages have been added to the Lite Software package manager. The distribution also includes some package updates: "Details: kernel: 5.4.0-52 ( custom kernels also available via our Repository for versions 3.13 - 5.9); Firefox: 82.0; Thunderbird: 68.10.0; LibreOffice: 6.4.6.2; VLC: 3.0.9.2; GIMP: 2.10.18; Base: 20.04.1. Known Issues: No prompt to eject Media at the end of the Legacy install, prompt is available at the end of the UEFI install. Release Notes - not working on first installer slide. Desktop icons - English support only. GRUB - holding shift down whilst booting in UEFI mode does not bring up the GRUB menu (works in Legacy mode), waiting for Ubuntu fix. GRUB menu shows Linux Lite as 'Ubuntu'. After you install Linux Lite, you can change GRUB to show 'Linux Lite'." Further information and screenshots can be found in the project's release announcement. Download (SHA256): linux-lite-5.2-64bit.iso (1,365MB, torrent, pkglist).