In this tutorial we will see how to install the Hi-Lights icon theme from PPA under Ubuntu/Linux Mint. Here are some screenshots for this icon theme: 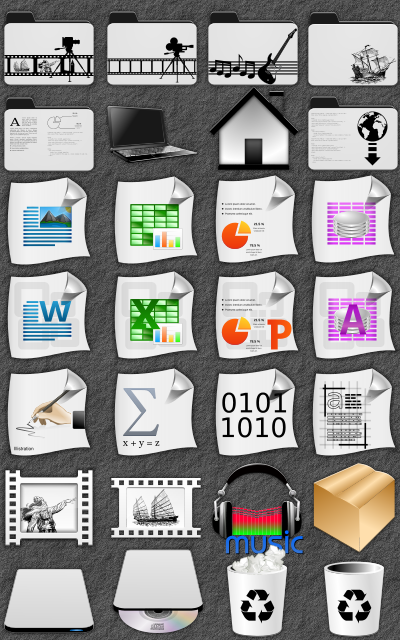 The PPA is compatible with these Linux distributions:

Open the terminal and install Hi-Lights with these commands:

To enable it from the terminal, issue this command:

Matt Housh has announced the release of CRUX 2.8, a small, independent and customisable Linux distribution designed for more advanced Linux users: "The CRUX team would like to announce that CRUX 2.8 x86 has been released." What's new? "Toolchain updates - CRUX 2.8 includes glibc 2.16.0, GCC 4.7.2 and Binutils 2.22; Linux kernel 3.5.4; the ISO image is processed with isohybrid and is suitable for burning on a CD and putting on a USB drive; important libraries have been updated to new major versions which are not ABI compatible with the old versions, we strongly advise against manually updating to CRUX 2.8 via ports, since these changes will temporarily break the system; the oldest kernel supported by glibc is 2.6.39; module-init-tools has been replaced by kmod; some deprecated video drivers have been removed from X.Org (radeonhd, i128, mach64, tdfx, voodoo)...." See the release notes for more details. Download the installation CD image: crux-2.8.iso (254MB, MD5).
Publicat de bubugov la 9:33 PM 0 comentarii

Enable ‘Notify OSD’ when Hovering Over ‘indicator-sound’ icon and Scrolling

True, I’ve had many issues with ‘PulseAudio’ with my previous, old, laptop. But it is working really well under the Vostro V131 notebook, and this time, I have no plans of getting rid of it

.
Anyway, though ‘PulseAudio’ is a separate project, Ubuntu developers too have done a lot of work integrating ‘PulseAudio’ into the OS and making it user friendly.
Take ‘indicator-sound’ icon for example. It lets you access a lot of ‘PulseAudio’ sound server related options to easily getting access to some utilities that use it (such as ‘Rhythmbox’) etc. Plus, they have also integrated it with Ubuntu’s built-in notification message system (‘Notify OSD’), for indicating some of its events as well.
Speaking of its user-friendliness, though I discovered it quite recently, there is a simple ‘trick’ that you can use to easily up/down the volume in ‘PulseAudio’.

For example, let’s say that you had ‘Rhythmbox’ playing something from the background while browsing the web, and wanted to quickly lower the volume, without ever touching neither ‘Rhythmbox’ nor the ‘indicator-sound’ icon (clicking) that resides in the system tray area.
For those of you who have not heard, then all you have to do is, simply put your mouse pointer over the ‘indicator-sound’ icon, then use the scroll wheel, and the volume will go up or down.
Now, as the volumes changes, the ‘indicator-icon’ does display the levels using the built-in, ‘three, half-circular-lines’. Still, it does not indicate subtle or small changes.
Luckily though, we can use a small trick, that enables the default ‘Notify OSD’ volume level indicator (the one that shows up when you change the volume levels using your keyboard) for this ‘event’ too, as it includes these subtle changes.
If interested, you can use the below command in your Terminal for enabling it.

That’s it (no need to logout or restart the computer).
Note: This surely works in Ubuntu 12.10, might also work in 12.04 LTS too, not sure about other versions though.
Publicat de bubugov la 9:32 PM 0 comentarii 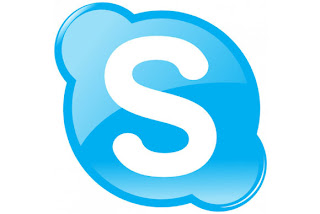 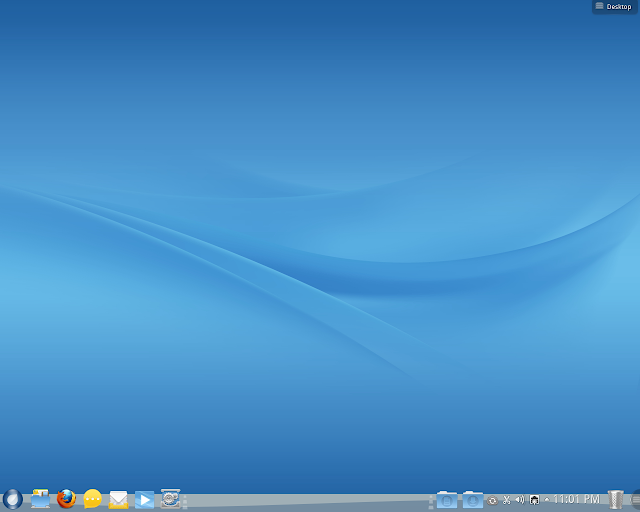 Konstantin Kochereshkin has announced that the first beta build of ROSA Desktop 2012, a Linux distribution targeting desktop users with leading-edge features, wide range of system customisation options and a large variety of applications, is ready for testing: "The ROSA team is pleased to announce a beta version of ROSA Desktop 2012 operating system. The system is ready for testing on a wide range of desktop and mobile devices. The work on ROSA Desktop 2012 is coming to an end. Developers have 'frozen' the main repository, performed mass rebuild of system packages to ensure their compatibility (using our own development and build system - ABF) and fixed several compatibility issues found earlier." Read the rest of the release announcement for information on new features and bug fixes, as well as a video demonstration. Download: ROSA.2012.Desktop.Beta1.i586.iso (1,441MB, MD5, torrent), ROSA.2012.Desktop.Beta1.x86_64.iso (1,483MB, MD5, torrent).
Publicat de bubugov la 4:50 AM 0 comentarii 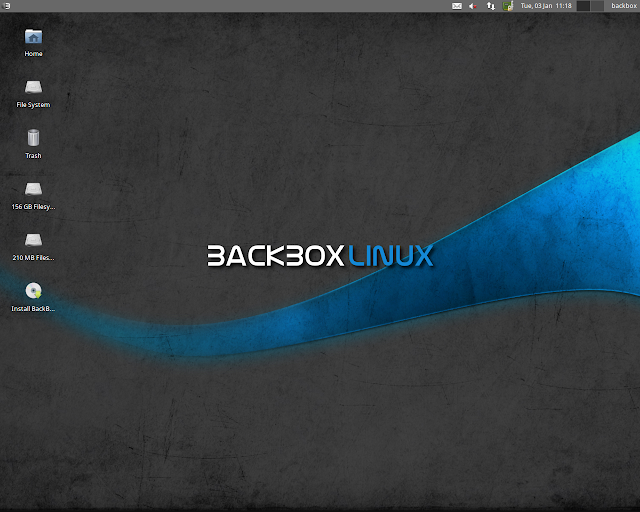 Martin Maurer has announced the release of Proxmox 2.2 "Virtual Environment" edition, an open-source virtualization platform for running virtual appliances and virtual machines, based on Debian GNU/Linux: "Hi all. We just released Proxmox VE 2.2, including countless improvements and a lot of exiting new features, like live snapshots for KVM guests. Version 2.2 release promotion: Get a reduction of 22% on your Premium, Standard or Basic Support subscriptions. You can easily host all your virtualized servers with Proxmox VE 2.2 and get a replacement for VMware vSphere, Microsoft Hyper-V or Citrix XenServer. No license costs, no vendor lock-in, affordable support and full open-source system. Support is available in English and German." See the release announcement and release notes for additional details. Download the 64-bit installation CD image from here: proxmox-ve_2.2-7f9cfa4c-28.iso (397MB, MD5, torrent).
Publicat de bubugov la 4:47 AM 0 comentarii

Tor Browser Bundle has been updated to version 2.2.39-4 which brings these new changes: 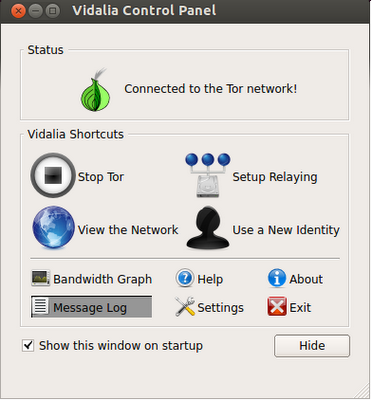 To download Tor Browser Bundle for Linux, click here. Or you can use the PPA below for easier installation. The PPA is available for these Linux distributions:

Use the Unity dash to start the application or run this command from the terminal:

In this tutorial we will see how to install XAMPP 1.8.1 from PPA under Ubuntu/Linux Mint. The latest version of XAMPP web server for Linux includes the following updates:


If you want to install manually, you can refer to this page. The PPA given below is compatible with the following Linux distributions:

Open the terminal and install XAMPP 1.8.1 with these commands:

You can now start XAMPP with this command:

Or use Unity dash and search for XAMPP Control Panel and start the server: 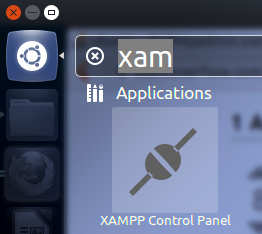 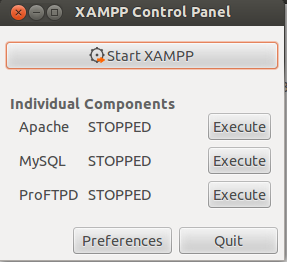 You can now access the XAMPP web interface at this link (replace localhost with your server IP address if needed): 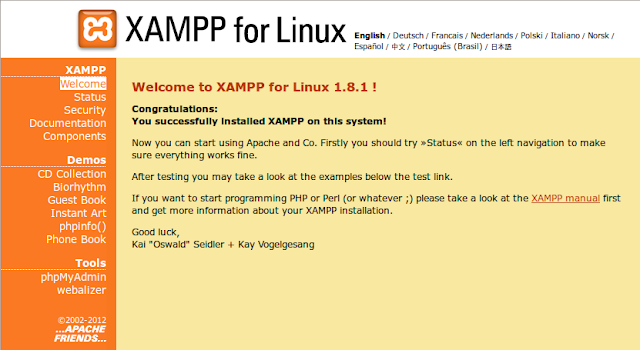 If you get this error when accessing phpMyAdmin:

Access forbidden!
New XAMPP security concept:
Access to the requested directory is only available from the local network.This setting can be configured in the file "httpd-xampp.conf". 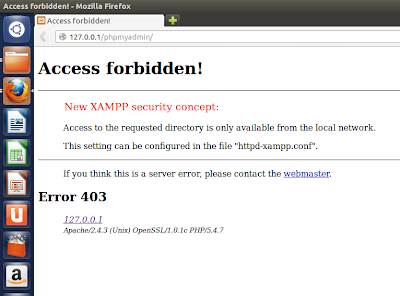 You can fix it with the following instructions:

- Open the terminal and run this command: 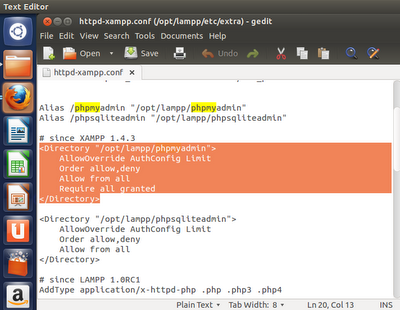 - Save your file and exit, then restart XAMPP with this command: