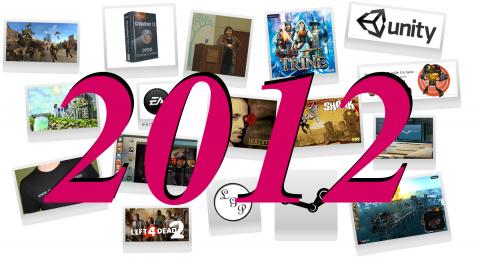 The year 2012 is over now and it's time to take a look back on it, and summarize the main events and games of the year.
The year started with an exciting and technically sophisticated title - Oil Rush. Unigine, a Russian software company behind the game, has been a big supporter of the Linux platform for a long time now. With Oil Rush the company has published the first game based on its own cross-platform engine. Originally, the company was specialized in complex 3D benchmark software. Maybe the most comprehensive Unigine's benchmark is Heaven - a beautiful and very demanding graphics benchmark that supports OpenGL 4.0.
In March, Gabe Newell sent us an e-mail telling that Valve is urgently seeking Linux developers and is in the process of improving graphics card drivers for Linux in cooperation with the graphics card manufacturers.
In April, one of the most successful game titles of the year, Trine 2, was released for Linux. The new game has not disappointed. It has been implemented with a lot of attention to the details: a beautiful graphics, great music and exciting story made it very popular among Linux gamers.
In June and September, new Humble Indie Bundle collections surprised us again with great new titles. To the highlights of HIB belonged the winners of different video game awards, Bastion and Torchlight. Torchlight is a very successful counterpart to Blizzard's Diablo and Bastion is a very atmospheric RPG.
In summer, Valve has repeatedly demonstrated, that it is taking development of Steam for Linux very seriously and has hired a prominent Linux game developer Sam Lantinga and has even started a Linux blog.
At the end of the year, it has finally happened what Linux gamers were waiting for years for: in November Steam for Linux has been started in a closed beta. Many bestseller games such as Team Fortress 2, Killing Floor or Serious Sam 3 were released for Linux at the same time. And, in time for Christmas, Valve has made the Linux community happy releasing Steam beta for everyone.
All in all, the year 2012 was much influenced by Steam for Linux, Humble Indie Bundle and Linux games funding on Kickstarter.com. Humble Indie Bundle has long been a driving force for the development of Linux games and has proved Linux as a viable gaming platform. In addition to the games being ported to Linux as a part of HIB, even more important, there were different game engines ported to Linux, like Unreal Engine 3 in Dungeon Defenders. Another common game engine, Unity was released for Linux this year. Porting of graphics game engines is probably the most important milestone on the way to releasing games for Linux.
The year 2012 was undoubtedly a phenomenal year for Linux gamers, and 2013 has good foundations to become the year of Linux gaming.
Publicat de Unknown la 12:55 PM 0 comentarii 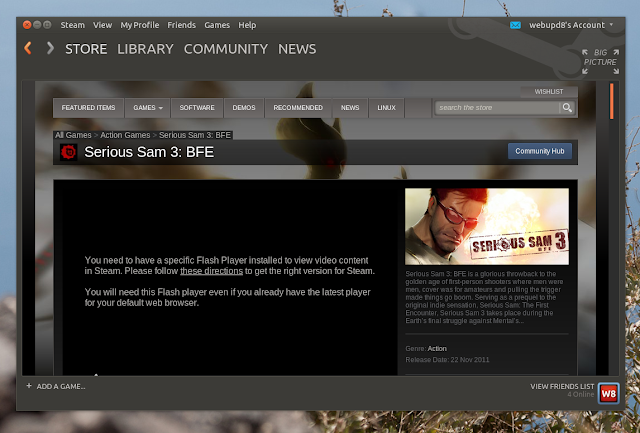 If you're using Steam for Linux beta on 64bit, chances are you can't watch game trailers because Steam can't find Flash Player and you get a message similar to the one below:

"You need to have a specific Flash Player installed to view video content in Steam. Please follow these directions to get the right version for Steam. You will need this Flash player even if you already have the latest player for your default web browser".


So here's how to get Adobe Flash Player to work with Steam for Linux on 64bit.

1. Download Adobe Flash Player 32bit tar.gz archive from HERE (yes, you'll need the 32bit version even though you're running 64bit) and extract it in your home folder.

2. Create the "plugins" folder inside the ~/.local/share/Steam/ubuntu12_32/ directory using the following command:

3. Copy the "libflashplayer.so" file (available in the folder extracted under step 1) to ~/.local/share/Steam/ubuntu12_32/plugins - if you've extracted the downloaded Flash Player 32bit archive in your home directory, simply use the following command to copy it to the right folder:
Now you can delete the "install_flash_player_11_linux.i386" folder from your home directory.

4. Restart Steam for Linux and Flash should now work on 64bit:

Note: the instructions above have been tested on Ubuntu 12.10 64bit.
Publicat de Unknown la 12:54 PM 0 comentarii

Untangle, Inc. has announced the release of Untangle Gateway 9.4, a new version of the Debian-based
network gateway with pluggable modules for network applications: "Untangle, Inc., a network software and appliance company, today announced the release of Untangle 9.4, the latest version of its award-winning multi-function firewall software. Untangle 9.4 includes a new Captive Portal as well as a new Host Table and improvements to Session Viewer. Captive Portal receives an entirely new implementation in Untangle 9.4. Captive Portal's role in Untangle's offering is growing more important in several key markets including hospitality and retail alongside established verticals like education and small/medium business. Despite adding new features and functionality to Captive Portal, Untangle has also made it simpler and easier to maintain. Captive Portal is now part of Untangle's Integrated Rules Engine (IRE) and can address critical use cases frequently requested by customers." Here is the full press release. Download (MD5): untangle_940_x64.iso (415MB).
Publicat de Unknown la 12:52 PM 0 comentarii