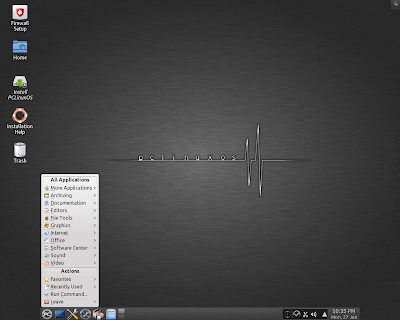 Bill Reynolds has announced the release of PCLinuxOS 2011.07 "KDE MiniMe" edition. This product is designed for more advanced users who prefer to install a minimal KDE-based (version 4.6.5) system and extend it later via the distribution's online repositories. From the release announcement: "PCLinuxOS KDE MiniMe 2011.07 for 32-bit computers (works on 64-bit computers too) is now available for download. What's new? The kernel was updated to version 2.6.38.8. Additional kernels, such as a PAE kernel for computers with more than 4 GB of memory, are available from our repositories. A BFS kernel for maximum desktop performance and a standard kernel with group scheduling enabled. X.Org Server was updated to version 1.10.3. Mesa updated to 7.10.3 and libdrm to version 2.4.26." Download: pclinuxos-kde-minime-2011.07.iso (460MB, MD5).
Publicat de bubu la 1:09 PM 0 comentarii