Steven Shiau has announced the release of Clonezilla Live 1.2.8-42, an updated version of the specialist Debian-based live CD designed for disk cloning tasks: "Stable Clonezilla Live 1.2.8-42 has been released. This release of Clonezilla Live includes major enhancements, changes and bug fixes: the underlying GNU/Linux operating system was upgraded, this release is based on the Debian 'sid' repository (as of 2011-05-13); Linux kernel was updated to 2.6.38; syslinux was updated to 4.04; initrd was compressed with XZ, and this makes Clonezilla Live ISO image smaller by 3 MB; the pre-run and post-run commands were moved to the login shell instead of init so now it can be interactive; the GRUB 2 boot loader for EFI was added, this is a testing function for booting an Apple machine from an USB device with GPT partition...." Read the full release announcement for a full changelog and a list of bug fixes. Download (MD5): clonezilla-live-1.2.8-42-i686.iso (133MB), clonezilla-live-1.2.8-42-amd64.iso (139MB)
Publicat de bubu la 7:41 AM 0 comentarii 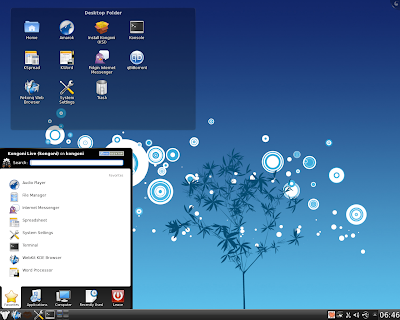 Robert Gabriel has announced the availability of the release candidate for Kongoni GNU/Linux 2011, a Slackware-based desktop distribution and live CD with KDE: "I'm very happy to announce the release candidate of Kongoni 2011 (Firefly). Since beta 2 a lot of bug fixes were done to this candidate, a lot of packages were migrated from Slackware and also brand new packages were added. There is a better accessibility support in KDE, Speech Dispatcher and eSpeak are installed by default in the live CD and also they were built against KDE Accessibility. KDE was updated to version 4.6.3 due to some bugs in the core of KDE and in some applications coming with KDE. Chromium was fully removed from the live CD and repository; apparently I didn't check if Chromium is FSF-compliant and it turns out that it is not. So now, the default web browser in Kongoni is IceCat which was upgraded to version 4.0.1." More details in the release announcement. Download: kongoni-2011-i486-rc-firefly.iso (673MB, MD5).
Publicat de bubu la 7:40 AM 0 comentarii