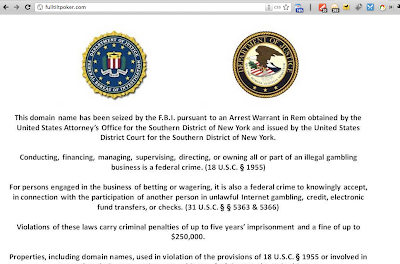 The feds seems to be in the midst of a crackdown against alleged online fraud. Indeed, a college apartment was recently raided because its occupants were suspected of engaging in “fraud” and “gold farming” within World of Warcraft.

The FBI alleges that the poker site owners established illegal bank accounts and transferred illicit gambling funds into them.

The majority of the information authorities used to justify the seizures apparently originated from Daniel Tzvetkoff, the man behind the payment system employed by online poker sites.

Interestingly, Tzvetkoff himself was (previously) arrested, but only after the bank accounts of some of the sites were drained of tens of millions of dollars.

After meeting with prosecutors, he was released on bail.

Meanwhile, some members of the above-mentioned sites confirmed they were able to successfully withdraw funds, while others say their money is locked within the system.