SharkLinux is an Ubuntu-based distribution featuring the MATE desktop environment. The project has released new installation media labeled SharkLinux 4.13.0-17. "This release comes with several system changes from previous builds which aim to increase system efficiency and allow greater control for user configuration. The more significant upgrades include changes to package management and the new 'pkg' command which significantly reduce install times and provide fallbacks in the event of mirror outages, configurations at startup are no longer network dependent and finish in 50% of the execution time from previous builds and tools added to allow easy toggling of both the automatic system maintenance and default sudo behaviour. As well SharkLinux has adopted the 'edge' variant of Ubuntu's HWE kernel and now features the 4.13 series kernel." Further details on the new features and package updates can be found in the project's release announcement. Download (MD5): SharkLinux-4.13.0-17.iso (1,551MB, pkglist).
Publicat de Unknown la 5:12 PM 1 comentarii 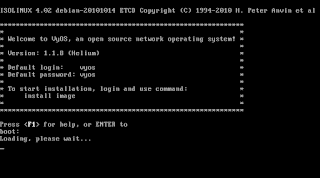 Daniil Baturin has announced the release of VyOS 1.1.8, an updated version of the Debian-based distribution for firewalls and routers born in 2013 from the ashes of the discontinued Vyatta project: "VyOS 1.1.8 is now available for download. It breaks the semantic versioning convention; while the version number implies a bug-fix-only release, it actually includes a number of new features. This is because 1.2.0 number is already assigned to the Jessie-based release that is still in beta, but not including those features that have been in the code base for a while and a few of them have already been in production for some users would feel quite wrong, especially considering the long delay between the releases. Overall it's pretty close in scope to the original 1.2.0 release plan before Debian Squeeze was EOLed and we had to switch the effort to getting rid of the legacy that was keeping us from moving to a newer base distribution." See the release announcement and the changelog for further information. Download (SHA1, pkglist): vyos-1.1.8-amd64.iso (230MB, signature), vyos-1.1.8-i586.iso (220MB, signature). Also available from OSDisc.
Publicat de Unknown la 4:05 PM 1 comentarii