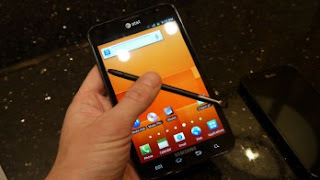 It’s a well known fact that there’s nothing like a bit of graphing to brighten up a geek’s day. This seems to be well understood by a Reddit user that goes by the name of “Thare” who, after embarking on a search for a new Android phone that had the largest screen while maintaining the smallest possible size, decided to share the wealth of information that he had gathered.
It will come as no surprise that of the phones he compared the Samsung Galaxy Note ended up at the top of the heap having 66.9% of its body area made up of touch-screen real estate. Of course, no one can really call the Note a small device, unless they possess Shaquille O’Neal-sized hands.

While this isn’t a comprehensive study of all the available Android devices on the market, Thare did a good job including a range of the most popular devices across the four US carriers. Samsung also garnered the second spot on the list with its yet to be released Galaxy S3 (which of course is made for humans) which has 66.1% of its svelte design available for touch interactions. HTC rounds out the top three with its EVO 4G LTE phone running on Sprint. Its 4.7-inch screen gives owners 66% of real estate to play with.

iPhone owners won’t be surprised to see the 4S coming in next to last place, with the trade-off being of course those beautiful Retina displays that Apple is installing in the world’s most popular smartphone. Which leads to an interesting thing to point out. While the Galaxy Note certainly has a large screen, it also has the distinction of having one of the lowest pixel density’s in the chart. While it’s the first Android device to sport a higher resolution than the 4S, the iPhone still takes better advantage of the space it has to work with by having a pixel density of 326 ppi compared to the Note’s 285.

While the comparison of different devices is certainly interesting, probably the real gem that is visualized is the slow progression we are seeing in the mobile industry towards larger screens installed in consumer devices. With rumors abounding that Samsung has retooled many of its assembly lines to mass-produce its flexible OLED screens, it’s conceivable that we could, sometime in the near future, see bezel-less devices to hit retail stores. While market analysts say that it won’t be until 2017 before we see the market dominated by flexible display devices, it’s certainly interesting to think about the possibility because bezel-less handset will totally change this list. 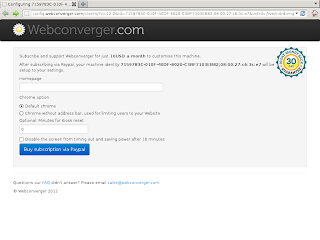 Henry Kai has announced the release of Webconverger 13.0, a specialist Debian-based distribution for Internet kiosks and other web-only deployment scenarios: "Webconverger 13 excitingly includes WebGL 3D accelerated support for NVIDIA hardware and security enhancements, as well as: search engine changed to DuckDuckGo from Google after signing a revenue share deal on sponsored links like Linux Mint; new boot API to override DNS; new API to support scheduled shutdowns; updated Firefox to 10.0.4; updated Flash to 11.2.202.235; updated dwm to 6.0. All users should upgrade to this release, especially those with NVIDIA hardware." Read the remainder of the release announcement and visit the project's redesigned website for further information and a detailed changelog. Download link: webc-13.0.iso (426MB, MD5).
Publicat de bubugov la 7:38 PM 0 comentarii

Guess Who's Back for Iron Man 3?

Rejoice! It looks like Jon Favreau will be returning to the Iron Man franchise after all. After stepping down from the director's chair, many fans were worried that the former Iron Man 1 & 2 helmer wouldn't be reprising his role as Happy Hogan -- Tony Stark's driver/bodyguard/right-hand man -- in Marvel's Iron Man 3. But according to Favreau's Twitter, we needn't worry any longer.
Earlier today, Favreau tweeted a brief statement, "BTW," along with the following image:

While this is by no means official, it's probably safe to say that Happy will at least be making an appearance in the film. (Thanks to Twitter follower Michael Baginski for the heads-up.)
In other casting news, Variety reports that Ashley Hamilton is in negotiations to play one of the movie's villains, Firepower (aka Jack Taggart). In the comics, the character is described as the pilot of an experimental armored suit under the secret mission dubbed Project: Firepower. Hamilton is a personal friend of Robert Downey Jr., though they've never actually worked together.

Shane Black will be directing Tony Stark's latest adventure from a script he co-wrote with Drew Pearce. Disney has slated the film for release on May 3, 2013.
Publicat de bubugov la 9:44 AM 0 comentarii

Before we were obsessing over Witch Doctor and Demon Hunter builds, we were rolling the dice to unlock Salarians and Quarians in Mass Effect 3′s PvE multiplayer. The gamble of its mystery box Reinforcement Packs is dangerously addictive, and next week the loot count will increase — BioWare’s already giving us more stuff with a follow up to last month’s Resurgence Pack.

The free “Rebellion Pack,” which releases Tuesday, May 29, will add two new maps, six characters (including Ex-Cerberus and Vorcha characters), three new weapons, and new consumables. Oh man. A description of every addition can be found on the official Mass Effect 3 site. 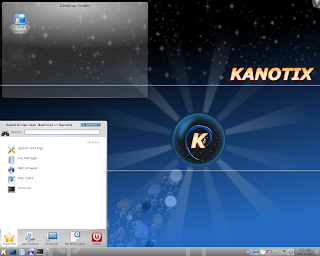 Maximilian Gerhard has announced the release of KANOTIX 2012-05, a Debian-based desktop distribution and live DVD featuring the latest KDE desktop: "The first few days of LinuxTag 2012 in Berlin are over. It seems to become a tradition for KANOTIX to release at LinuxTag. As announced earlier in highlight report we offer an update release for KANOTIX 'Hellfire' and a preview to KANOTIX 'Dragonfire'. KANOTIX 2012-05 'Hellfire' is still based on Debian 6.0.5 'Squeeze' and contains KDE SC 4.4.5, Iceweasel 12.0, Icedove 3.1.16, Pidgin 2.10.4, Linux kernel 3.2 (Ubuntu recompiled), LibreOffice 3.5.3, WINE 1.4, GFX overlays for NVIDIA and AMD 3D graphic driver. The preview of KANOTIX 2012-05 'Dragonfire' is based on the upcoming Debian GNU/Linux 7.0 'Wheezy'." Read the rest of the release announcement for more details. Download the 4-in-1 DVD image containing both KANOTIX 2012-05 editions in i386 and amd64 flavours: KANOTIX-LinuxTag2012-4in1.iso (4,341MB, MD5).
Publicat de bubugov la 2:18 AM 0 comentarii