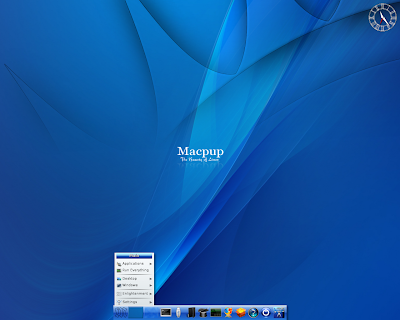 Johnny Lee has announced the release of Macpup 525, a Puppy-based Linux distribution with a customised Enlightenment 17 desktop: "Macpup 525 is based on Puppy Linux 5.2.5, 'Lucid Puppy', An official Woof build of Puppy Linux that is binary-compatible with Ubuntu 10.04. It contains all the applications from Lucid Puppy, with the addition of Firefox 4. Extra applications like Opera or GIMP are available for easy download from the Quickpet application on the iBar or the Puppy package manager. Macpup 525 also includes the Enlightenment E17 window manager. The EFL libraries version 1.0.999 and E17 version 59456 were compiled and installed from source. To keep your CPU cool and your fan quiet use the CPU Frequency Scaling Tool. The first time you run Macpup, the system will be running totally in RAM." Refer to the release announcement for further details. Download the live CD image from here: Macpup_525.iso (155MB, MD5).
Publicat de bubu la 6:18 PM 0 comentarii