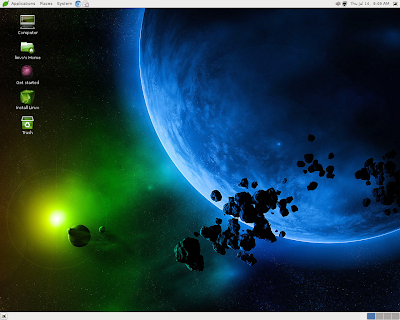 Ivo Georgiev has announced the release of Linvo GNU/Linux 2010.12.6, a Slackware-based (installable) live DVD with GNOME 2.32, custom package manager, multimedia codecs support and other user-friendly features: "Linvo 2010.12.6. This is probably the last maintenance release of the GNOME-powered 2010.12 series. It features a couple of bug fixes (e.g. dependency handling) and improvements (e.g. smooth download progress bar) to LinvoApp, the distinctive applications management system. Unfortunately, some applications (mostly obsolete) have been removed from the website because they were not built right by the LinvoApp automatic builder, so now we're down to only 125 applications. Of course, LinvoApp is still beta and you can always use the traditional Gslapt to install software if you miss something which is not in the Applications category." Here is the brief release announcement. Download (MD5): linvo-2010.12.6-x86.iso (737MB).
Publicat de bubu la 8:15 PM 0 comentarii