Manual Book for Ubuntu 12.10 announced by Ubuntu Manual Team. With title “Getting Started with Ubuntu 12.10″ and writen in over 52 languages, including English, French, Deutsch, Chinese, Italian, Finnish, Russian, Spanish, Romanian, Vietnamese, Japanese, Serbian, Catalan or Australian English. It contain about how-tos, guides, basic information about Linux and its components, and everything one needs to know after installing Ubuntu 12.10.
The Ubuntu 12.10 Manual Book Designed for Newbie in Ubuntu and advanced users. the 143 pages long PDF document will definitely help new users to learning and understanding new Ubuntu 12.10 Quantal Quetzal. This book Now ready to download for free

Download: Manual Book Ubuntu 12.10
The Ubuntu 12.10 Quantal Quetzal will be the 17th release of the Ubuntu operating system, supported for 3 years on the Desktop and 2 years on the Server. Ubuntu 12.10 (Quantal Quetzal) came with Unity interface updated, updated applications, as well as brand new artwork. it will be released on October 18th, 2012.
Publicat de bubugov la 10:29 PM 0 comentarii 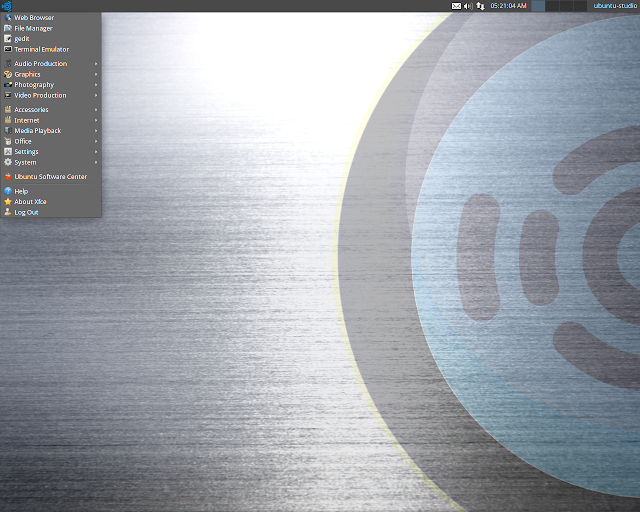 Ubuntu Studio 12.10, a new version of the official Ubuntu variant compiled to give sound, video and graphics artists a free computing platform on which to unleash their creativity, is out and ready for download: "Ubuntu Studio is the Ubuntu flavour designed for content creation. Improved interface: a new web page, the help button on the main menu points there; Task Manager has been switched to System Monitor for better memory use display; a main menu tool has been added to setting to allow the user to change their menu; add/fix text Plymouth theme; set up Software Centre menu items for our workflows; fixed submenu icons for accessories, education and network. New software include: Xfce updated to version 4.10; Linux kernel (low latency) is now version 3.5." See the complete release notes for more details. Download (SHA256): ubuntustudio-12.10-dvd-i386.iso (2,130MB, torrent), edubuntu-12.10-dvd-amd64.iso (2,165MB, torrent).
Publicat de bubugov la 10:24 PM 0 comentarii 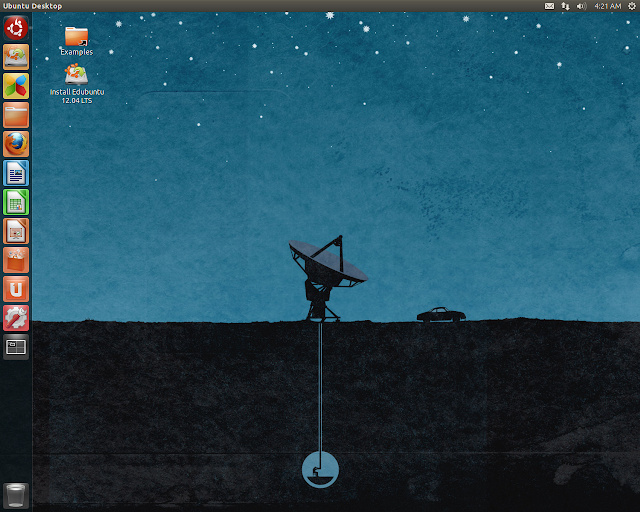 Edubuntu 12.10, a special flavour of Ubuntu designed for educational institutions, was also released yesterday as part of the Ubuntu product family: "The Edubuntu development team is proud to announce the release of Edubuntu 12.10. Edubuntu 12.10 is a regular release bringing updated software and a few improvements. For larger deployments and environments where a stable, well tested system is preferred, the Edubuntu development team strongly recommends staying on the long-term support releases (current release is 12.04.1). LTSP users should also remain on Edubuntu 12.04 LTS as 12.10 is lacking Unity support for LTSP and has been reported to be much slower than 12.04. This new release is well suited for home users and users who wish to use the latest versions of the available software." Read the release announcement and release notes for further info. Download (SHA256): edubuntu-12.10-dvd-i386.iso (2,558MB, torrent), edubuntu-12.10-dvd-amd64.iso (2,584MB, torrent).
Publicat de bubugov la 10:23 PM 0 comentarii

The Nvidia driver 304.60 has been released recently in the Nvidia website. In this tutorial we will help you install it in Ubuntu/Linux Mint. For Ubuntu 12.10  (Quantal Quetzal), the PPA given below doesn't support it so far, but you can install the driver manually as shown below.

Here are the changes and bug fixes in this latest release:

Fixed a bug that caused the X server to crash if a display was put into DPMS off mode and subsequently reenabled while screen transformations are in use.

Fixed a bug causing OpenGL stereo applications to not work properly when using passive stereo modes 5 through 9 on Quadro Fermi and newer GPUs.

Added reporting of the current utilization of Dedicated GPU Memory to the GPU information page of nvidia-settings.

Added support for the "Backlight" RandR output property for configuring the brightness of some notebook internal panels.

Fixed a bug that prevented the Ubuntu Unity launcher panel from unhiding: https://bugs.launchpad.net/unity/+bug/1057000

Fixed a bug that caused nvidia-installer to sometimes attempt to write a log file in a nonexistent directory.

Fixed a bug that caused incorrect input transformation after resizing an NVIDIA X screen with xserver ABI 12 (xorg-server 1.12) or newer.

Fixed a bug that caused GLX to leak memory when Xinerama is enabled.

To install from x-swat PPA for Ubuntu 12.04/Linux Mint 13 or older, run these commands:

Or install manually with these instructions for Ubuntu 12.10 (Quantal Quetzal):

1. Open the terminal and download this file with these commands:

2. Press CTRL+ALT+F3 to enable CLI mode, log in using your username and password, then kill the Xserver with this command:

3. Start the installation of the Nvidia driver 304.60 with this command:

4. When the installation is complete, run this command to reboot your system:

Note: You may also use these instructions to install the driver in GUI mode without the need to kill the Xserver.

You can also check this tutorial which explains how to install the Nvidia driver in Recovery Mode.
Publicat de bubugov la 10:21 PM 1 comentarii 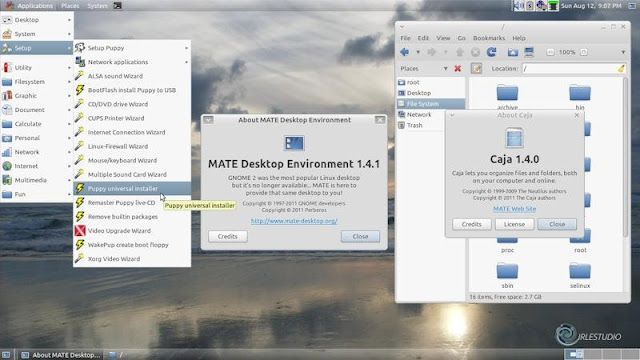 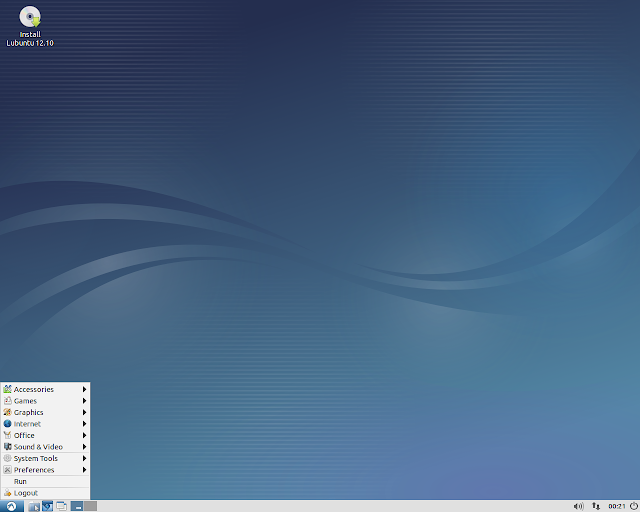 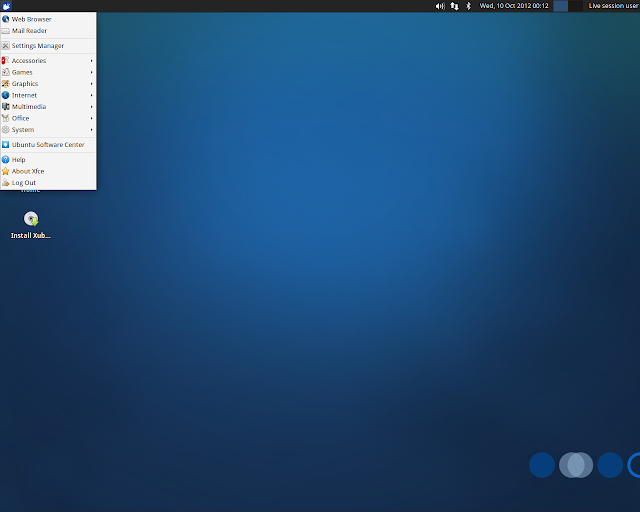 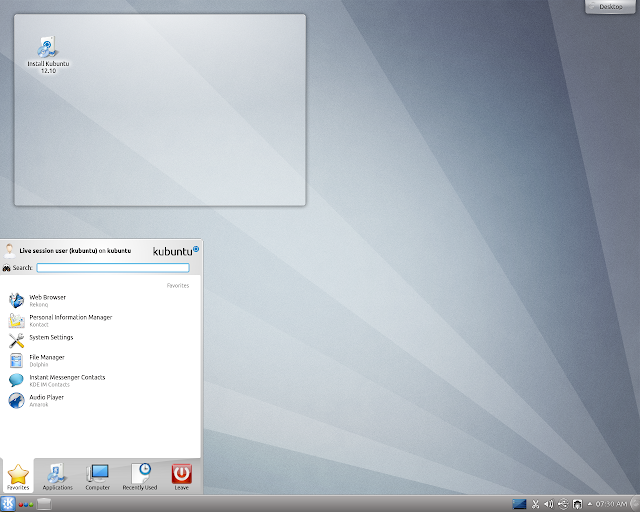 Following the release of Ubuntu 12.10 earlier today, Kubuntu 12.10 is the brand-new version of the project's Linux distribution showcasing the latest KDE desktop: "The Kubuntu community is proud to announce the release of 12.10, the Quantal Quetzal. This is the first release to burst free from the limits of CD sizes giving us some more space for goodies on the image. It also does away with the alternate installer images, adding advanced partitioning options to the desktop image. Built on Ubuntu's core and polished with KDE's applications and workspaces, Kubuntu 12.10 is a grand example of friendly, fast and beautiful software." See the full release announcement and read through the detailed release notes to learn more. Download (SHA256): kubuntu-12.10-desktop-i386.iso (953MB, torrent), kubuntu-12.10-desktop-amd64.iso (934MB, torrent).
Publicat de bubugov la 4:41 AM 0 comentarii 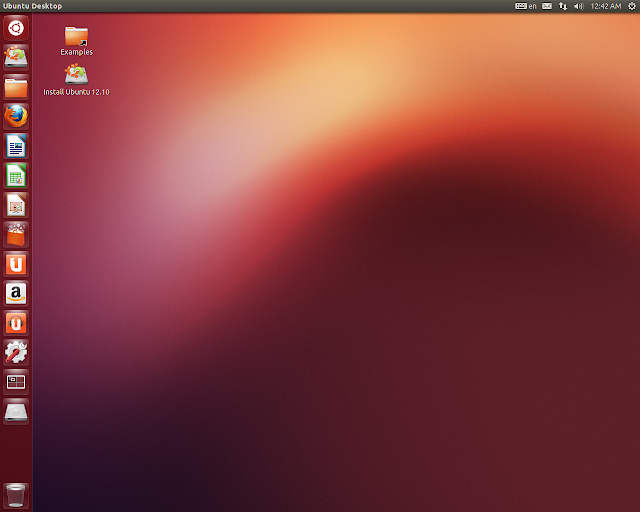 Ubuntu 12.10 has been released. Featuring many popular open-source applications, up-to-date Unity desktop and new cloud-related features, the latest version of Canonical's Linux distribution for desktops and servers is ready for download: "Ubuntu 12.10 introduces innovations that bring together desktop and cloud-based experiences, representing the next stage in the transition to a multi-device, cloud-based world. New Previews give large, clear previews of content as it appears in the Dash search results, giving users a quick way to get more information to help find what they are looking for. The new Web Apps feature makes frequently used web applications available through the desktop." Read the release announcement and see the release notes for further information. Download (SHA256): ubuntu-12.10-desktop-i386.iso (753MB, torrent), ubuntu-12.10-desktop-amd64.iso (763MB, torrent).
Publicat de bubugov la 4:40 AM 0 comentarii

The latest version of Ubuntu, and its different desktop flavours, is out now, with controversial new features.

It’s that time of the year again, and Canonical have release Ubuntu 12.10 without any delays. The first version since the all important LTS release in April, the Quantal Quetzal is less about stability than Precise Pangolin was, and more about adding new features in an attempt to make the user experience better. At least, that’s the idea.
An overview of the major changes can be found below:
GRUB 2 updated
Graphics makeover for Ubuntu Greeter and the default theme
Remote login/remote desktop access added to Greeter log-in prompt
Nautilus file manager to stays at version 3.4
Linux Kernel 3.5
Unity revs to 6.8.0; Unity 2D is dropped; previews added
Software Updater simplified
New Share Links tab in Ubuntu One Control Panel
New centralised management for online accounts
New versions for some bundled applications
Disk image is now 800MB, so install requires a USB memory or a DVD
Menus are reorganised and many previous menu choices consolidated under Dash
Python revs to version 3 (with version 2 still supported for now)
New Dash Photo lens; new Gwibber icon
Dash search returns online results from Ubuntu One and Amazon Dash preview

Those last two points have caused concern for people in the run up to the release – last reports suggest that while queries are sent to a centralized server at Canonical, the Amazon results get sent directly to the user. While this of course may not affect some users who perhaps use Amazon and like their search results, others that value their privacy have been concerned over how much Amazon will be able to see. At the very least, issues with data not been encrypted in transit have been dealt with.
This is Ubuntu’s first step towards a more online connected desktop, and while it could work well in the long run, it seems to have got off to a shakey start. Either way, you can grab the ISO for the distribution now, and of course the other flavours and desktop environments will remove some these online search features.
In other Ubuntu news, Marh Shuttlework has announced that the next Ubuntu will be named Raring Ringtail.