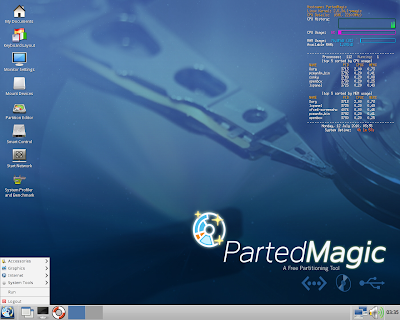 Patrick Verner has announced the release of Parted Magic 6.3, a utility live CD with software for disk management and data rescue tasks. Besides the usual i486 image, Parted Magic now also exists in i686 and x86_64 flavours for more modern computers. From the release announcement: "This release fixes a few obscure typos and bugs in some of our scripts. Pburn and Pfilesearch have been added for testing. There are no menu entries yet, so run 'pburn' from the command line. The main reason for this release was to add more kernel CPU options. Parted Magic now comes in i486, i686, and x86_64 editions. The only testing I've done with x86_64 was on my i7 machine. I've successfully chrooted into a 64-bit Slackware 13.37 and ran some command-line programs. The i686 CPU is set to PIII, so if you are running a PII, use the i486 version instead." Download (MD5): pmagic-6.3.iso (170MB).
Publicat de bubu la 6:21 AM 2 comentarii