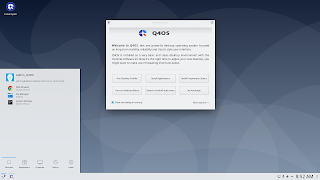 The Q4OS team have published a new update to their distribution's Debian-based desktop operating system. The project's new release updates the Q4OS 3.x series, bringing it up to date with Debian's Stable branch. For this release Canonical's Snap framework has been removed, though it can be installed from the project's software repositories. "An update to Q4OS 3 Centaurus LTS has been released. The new 3.13 Series receives the recent Debian Buster 10.7 update, updated Debian stable kernel, important security and bug fixes, and several specific Q4OS enhancements. Canonical's Snap daemon and related dependencies have been removed from the Q4OS desktop profiles, however they're still available in the default repositories. A few printing specific bugs has been patched and a new driver installer for Hewlett-Packard printers and scanners has been included in the Software center. In addition to the above, Q4OS 3.13 brings other enhancements, such as improved Calamares installer and a cumulative upgrade covering all changes from the previous stable Q4OS 3 Centaurus release." The distribution's blog offers additional information. The project provides two editions, one with the KDE Plasma desktop and the other with the Trinity desktop environment (TDE). Download (MD5, pkglist): q4os-3.13-x64.r1.iso (897MB), q4os-3.13-x64-tde.r1.iso (697MB).